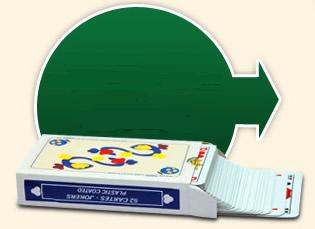 Signaling is more technical game than the rule. The software plays and interprets all these conventions and indications presented here. Too vast to be summarized in a few lines. All agreements, from simple to complex, are alerted automatically by the software, and as far as running auction.. Plus an explanatory, very useful for beginners, but also for more sophisticated, which can progress indefinitely. Here, the most common conventions:
major fifth, 1NT 15-17HCP, 2NT 20-21HCP, 2

* Odd-even strict
* The fourth best in no trump contracts at the lead
* Classic head sequence
* Direct signal with high cards and refusal with small, whatever the nature of the contract
* Discards, too, direct signal to the suit

Priority, opening lead in suit bidded by the partner or head sequence as AKQ or KQJ etc..
At Trump: lead a SINGLETON (single card in his suit) other than the trump.
Playing with dummy: count your tricks suit by suit. Establish if you are losing cards. To establish a suit, you can:
* Play your top trick and quick trick in suit to fall highs opponent honors
* Attempt a finesse, that is to say, trying to make a trick with a chance to honor two
* Ruff this suit with the trumps of dumùmy. The basic defense replay in the suit of partner signal with a high card if the suit you like, or refused with a small. 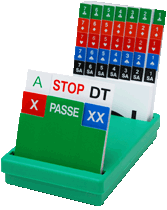